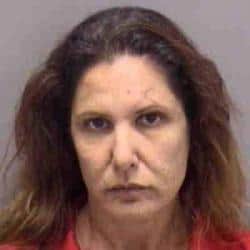 Several vouchers on the Key West Express, airline flights to New Jersey, a motel room for several nights, and a package sent and copies made at a UPS store, resulted in the arrest of a woman who worked for a Bonita Springs dentist.

Randy Susan Verdino, 46, who lists addresses in the 18000 block of Narcissus Road, Fort Myers, and 20000 block of Oahu Circle, Estero, was charged with grand theft, use of another’s identity without their permission and two counts of illegal use of a credit card. She was released Thursday evening from Lee County Jail after posting $6,000 in bonds.

According to a Lee County Sheriff’s Office report:

Verdino worked at Bonita Dental, located in the same strip mall as the Sheriff’s Office substation at 8951 Bonita Beach Road.

She gave detectives copies of the account statements which show:

On Oct. 26 a $1,485 charge from Key West Express on Fort Myers Beach for 15 charter boat vouchers after Eck’s credit card information was sent by facsimile to the company. A man at the charter company said he took the vouchers to the dental office but could not remember who received them.

On Nov. 22, a BillMeLater online credit account was opened under the dentist’s name and Social Security number. A total of $860.80 was charged for four round-trip Jet Blue tickets from Fort Myers to Newark, N.J., in the names of Randy Verdino, Joseph Verdino and two of Randy Verdino’s children. Their names were not released. The flight left Fort Myers on Nov. 24 and returned on Dec. 1.

The store owner identified Verdino as the person who made the charges. He told deputies the copies were for a fishing boat company and not dental related.