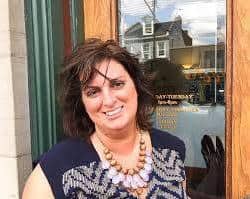 NEW BRIGHTON – Dr. William Logan didn’t know that the management software he had been using for 10 years gave him the ability to audit the records of his New Brighton dental practice.

That discovery, late last year, led him to a more startling find.

New Brighton Area police said the woman who had been manager of Logan’s practice, at 601 Fourth Ave., had skimmed at least $10,500 from the practice over the last three years, until she was fired Dec. 29, when the software’s audit function uncovered several discrepancies.

Polixeni Kouvaras, 32, of 404 B Sharon Road in Moon Township has been charged with theft by deception.

She was arraigned Friday and released on $10,000 unsecured bond.

According to court records, Kouvaras served as Logan’s office manager from July 2002 until she was fired in December. In that capacity, she was responsible for all billing for the office.

Police said Kouvaras employed 15 methods to cover her tracks as she skimmed cash from payments to the office, from offering unauthorized discounts for cash payments and making false insurance adjustments to pocketing cash co-payments and altering fee schedules.