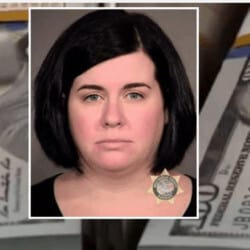 PORTLAND, Ore (KOIN 6) — A local dentist was hours away from being evicted, and his business shut down, because his former office manager failed to make payments on the lease, and pocketed the cash for herself, according to office staff.

Rob Yauger is the current manager for Dr. David Carothers Family & Cosmetic Dentistry. He said he was able to talk with the Multnomah County Sheriff’s Office in time to stop them from seizing the office as Carothers and his staff worked to rebuild the business after a former employee stole more than $42,000.

Ranell Daringer, 29, appeared in Multnomah County Circuit Court Wednesday and was arraigned on a grand jury indictment following an investigation by the Portland Police Bureau’s White-Collar Crimes Unit. The indictment charges her with four counts of aggravated first-degree theft, two counts of first-degree theft and one count of theft by deception.

According to court records, Daringer stole the money between March 28, 2011 and Nov. 7, 2013. Officials said Daringer was the former front office manager and had almost complete control over the dentist office finances. Yauger said when collection agencies would  call, Daringer would hide them from Carothers.

Yauger said the business is slowly getting back on its feet and is working to rebuild its reputation with credit companies, other businesses and customers.

“It was a lot of money,” Yauger said.

He said he first discovered things weren’t right when he noticed time card and payroll discrepancies. The alleged theft, Yauger said, impacted the entire business. Many of the employees had payroll checks that bounced.

“If there was a way she could steal money, she pretty much did it,” Yauger said.

Yauger said when he noticed the discrepancies, he went through two years of bank and deposit records and noticed the missing funds. He eventually contacted police to help with the investigation. Officials determined that Daringer inflated her salary and stole cash payments that should have been deposited in the bank, Yauger said.

“We did our due diligence,” Yauger said.

He encouraged other businesses to do the same and contact law enforcement if they believe something is wrong. Police said employers should not feel embarrassed or fearful of reporting crimes of embezzlement.

“We don’t look at it as our fault,” Yauger said. “We just want to make sure we’re not burned again.”

Daringer entered a plea of not guilty Wednesday. She is scheduled to be in court April 8.

She was booked into the Multnomah County Detention Center after her arraignment, but was then released on her own recognizance.