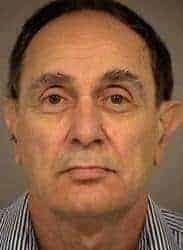 Leopold Weinstein, a Camarillo dentist, pleaded guilty to three counts of felony arson in Ventura County Superior Court last week. The plea comes a little more than a year after Weinstein, 64, was arrested on suspicion of trying to burn down two dental practices in the city on multiple occasions between June 2014 and January 2015. Shortly after his arrest, the Moorpark resident pleaded not guilty to three counts of arson to a structure, three counts of attempted arson to a structure and possession of a silencer. Weinstein was the owner of Dr. Leo, a dental practice that was part of the Spanish Hills Dental Group. The practice on Ponderosa Road is now closed. The investigation by Ventura County sheriff’s detectives and Ventura County Fire Department investigators began in June 2014 when two containers of flammable liquid were found on the roof ofRosewood Dental Group on Mission Oaks Boulevard in Camarillo. The incident was the first of several. Fire and law enforcement investigators were called to a blaze later that month at Camarillo Dental Practice. In late July 2014 a second fire was reported at Rosewood Dental Group. Rosewood Dental, a practice of five dentists, was targeted twice more as investigators found flammable liquids outside the office on Sept. 12 and 19 of 2014.
Weinstein became a person of interest in the investigation after a resident spotted his car at Camarillo Dental Practice sometime after one of the arsons in June.
Investigators, who later learned his car had been seen at previous incidents, said they believed his motives were financial. On Jan. 28, 2015, Rosewood was targeted again. Investigators said surveillance footage showed Weinstein setting fire to the building. He was arrested two days later after officials found additional evidence at his Moorpark home linking him to the crimes. Prosecutors said Weinstein will be sentenced July 20. Richard Simon, the senior deputy district attorney involved with the case, said he is pleased Weinstein “took responsibility for what he did.” Simon, who praised the county sheriff’s office and police department for their thorough investigations, also shed some light on Weinstein’s motives. “It’s a weird case,” he said. “This is a guy who has never had a criminal record, but gets this weird idea in his head that burning the practices would improve the billing practices or policies of the insurance companies. His explanation was that, if others suffered losses, they would band together against the insurance companies for the way they bill .” The deputy district attorney said the defense is exploring “psychological issues” to save Weinstein from serving time in an effort to avoid a prison sentence. William Haney, the attorney representing Weinstein, declined to comment on the plea. Have questions or concerns? Call us toll-free at 888-398-2327 or choose “Contact Us” from our menu