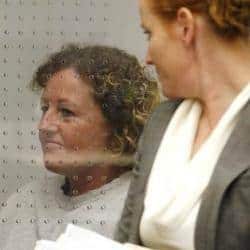 Bookkeeper Victoria “Vicki” Lee Wafford embezzled $1.6 million from the Oceanside dental office where she worked, and gambled it away, authorities said.

Wafford, who was 50 when she was arrested, spent most of the money she stole on luxuries, trips and gambling while her employer and co-workers suffered, Deputy District Attorney Anna Winn said.

Wafford’s attorney said his client’s actions were driven by a prescription drug addiction.

Wafford wrote more than 1,000 checks from the dentist’s account to herself and credit card companies from 2001 to 2008, Winn said.

In the accounting books, however, Wafford listed the payees as dental suppliers and other vendors, according to court documents.

The theft came to light in the summer of 2008, when the dentist launched an extensive audit of the books to get personal loans to cover business expenses.

Federal agents seized everything of worth at Wafford’s Temecula home, including a power boat, multiple sets of golf clubs, a Lexus, a newer Toyota Tundra and about $1,000 in coins, Winn said. She was sentenced to eight years in prison.

Have questions or concerns? Call us toll-free at 888-398-2327 or click HERE.
http://www.sandiegouniontribune.com/news/2012/may/04/region-notable-local-embezzlement-cases/