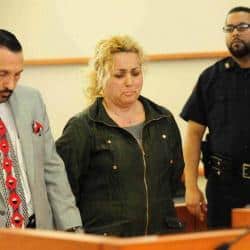 While the dentist was away, his office manager played one.

Valbona Yzeiraj, 45, was arrested Thursday on accusations of masquerading as a dentist at a Bronx dental office and charged in a 13-count indictment with pulling teeth and even performing root canals.

The paper-pusher who dubbed herself “Dr. Val” is not a licensed dentist in the state, or anywhere else in the nation. But that didn’t stop her from treating patients for cash.

Some of her work came with a bite, leaving one patient with an infection from a botched root canal, and another suffering persistent pain two years after treatment, McCadden said.

From late 2012 to the summer of 2013, Yzeiraj scheduled appointments at Ultimate Dental Care in Riverdale while the real dentist, Dr. Jeffrey Schoengold, was out of the office.

When Schoengold discovered what she was up to, he fired her and reported her to police.

“This is a gross betrayal of trust to me and to the community,” Schoengold, 61, told the Daily News outside his second office in White Plains.

He said he hired Yzeiraj through Craigslist in 2009 and that he was “shocked” to learn what she was doing behind his back.

“There was no record at all,” said Schoengold, a practicing dentist for 34 years. “You hear about things like this. You never think it’s gonna happen to you and here I am and it’s happening.”

In a jaw-dropping twist, Yzeiraj tried to pilfer $20,000 from Schoengold’s payroll department after she was canned, prosecutors said.

Since the deception, Schoengold has installed cameras in his Bronx office to monitor his employees while he’s away.

Yzeiraj, of White Plains, told authorities she had dental training in her native country of Albania. But officials said there’s no evidence she had a lick of training in the United States.

This is a gross betrayal of trust to me and to the community.

McCadden said Yzeiraj targeted members of the Albanian community for her bogus practice, preying “on their vulnerabilities.”

She was arraigned Thursday afternoon in Bronx Supreme Court on charges ranging from felony assault to unauthorized practice. She was also charged with felony attempted grand larceny and misdemeanor reckless endangerment.

Yzeiraj pleaded not guilty and was ordered held on $20,000 bail. She faces up to seven years in prison if convicted.

Justice Steven Barrett barred her from taking any job in the dentistry field for the duration of her case.

“She intends to fight each and every one of these charges,” said Yzeiraj’s court-appointed lawyer Corey Sokoler.

Yzeiraj’s husband, who attended the arraignment, brushed off the charges as “absurd.”

“My wife, operate on people? It made me laugh,” said Petrit Yzeiraj, 49. “She absolutely did not do it.”

But Schoengold’s patients didn’t see the humor in the allegations.