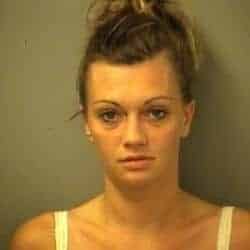 BAY CITY, MI — An Essexville woman police say stole prescription forms and used them to obtain controlled painkillers has accepted a plea offer.
Heather M. Malone, 32, on Wednesday, March 1, appeared in Bay County Circuit Court and pleaded guilty to two counts of obtaining a prescription by fraud. The charge is a four-year felony.
In exchange, the prosecution dismissed a charge of larceny in a building, also a four-year felony.
Circuit Judge Harry P. Gill is to sentence Malone at 1:30 p.m. on Monday, April 17.
Malone’s case dates to July 14, 2015. That day, a Bay County Sheriff’s deputy responded to a theft complaint placed by Dr. Raul Mosqueda, who has dental offices at 4181 Shrestha Driver in Bangor Township. Mosqueda said several prescription sheets had been stolen and he speculated Malone, a former employee who had quit a year and a half previously, was to blame, court records show.
Mosqueda told the deputy that he recently needed some painting done in his offices. He ran into Malone and she offered to do that job. Malone and another man in mid-June visited the offices to perform the task, the dentist told the deputy.
Though Mosqueda paid Malone $2,500, she never completed the task, he told the deputy.
On July 7, Mosqueda began receiving calls from several pharmacies asking if he had written prescriptions for Malone. He told them he had not.
Mosqueda provided the deputy with data recorded by the Michigan Automated Prescription System (or MAPS), showing multiple prescription requests in his name for Malone and others starting on June 18, court records show.
Between June 18 and July 2, Malone used the prescription forms in attempts to obtain 130 tablets of hydrocodone for herself, with seven others attempting to acquire 460 such tablets at pharmacies in Bay and Saginaw counties, court records show.
Hydrocodone is a semi-synthetic opioid. Brand names include Vicodin, Norco, and Lortab.
By July 27, Malone was lodged in the Bay County Jail on an unrelated matter (specifically, an armed robbery allegation). The next day, the initial deputy and a detective interviewed her.
During their conversation, Malone said she did steal the prescription sheets from Mosqueda’s desk. She and another man had used them to write numerous bogus prescriptions, though she said the pills obtained were used for personal use and never sold, court records show.
“Heather stated that she and (the man) would go to the various pharmacies with the individuals and wait for them to come out with the prescriptions for controlled substances,” states a police report contained in court files. “When the individuals came out of the pharmacy they would divide the pills three ways.”
Malone also claimed Mosqueda was aware of her addiction and had previously written her prescriptions for Vicodin. According to court records, between May 2014 and May 2015, Mosqueda had only written two prescriptions for Malone, one for tramadol and one for hydrocodone.