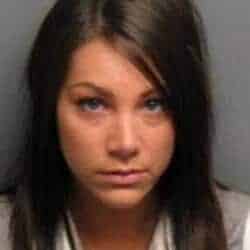 A former office manager is in jail for drilling more than $47,000 out of a Roseville dentist’s business accounts. Holly Ann Keate, 24, of Rocklin, was sentenced Nov. 12 to one year in Placer County Jail for embezzling $47,431 from Roseville dentist Dr. Thomas Schlehofer. Keate reportedly siphoned away the money for her own personal use between Aug. 25, 2008 and Jan. 22, according to Art Campos, Placer County District Attorney’s Office spokesman. In April, Roseville police arrested Keate just before she was to board a flight from Sacramento to Hawaii for a vacation.

The former office manager pleaded no contest to a grand theft by embezzlement charge in September, Campos said Wednesday. Schlehofer, who owns Sierra Gate Family Dental, told Judge Colleen Nichols in a letter that Keate had deceived people and abused her position as a manager. Keate reportedly pocketed cash payments from patients during her tenure at the office. It wasn’t until she quit several months prior to her Hawaiian vacation that office staff discovered the theft, according to earlier reports about Keate’s arrest. Keate used the money to take a vacation and have laser treatment and elective plastic surgery, Campos said. Schlehofer told the judge that the more than $47,000 Keate took meant coworkers could not receive bonuses and the office could not donate money to its sponsored charities, including an orphanage, Campos said.

The dentist said that ultimately, Keate’s actions and theft “nearly collapsed the office.” “She has abused her managerial position with malicious neglect of patients, their personal files, their credit cards and their cash,” Schlehofer wrote. “She preyed on the senior citizens of our community knowing they did not have insurance and would pay cash.” Keate was ordered to repay the dentist and will also be placed on five years of probation as part of her sentence. ~ Jenifer Gee

Have questions or concerns? Call us toll-free at 888-398-2327 or click HERE. Content retrieved from: http://www.auburnjournal.com/article/ex-dentist-receptionist-sentenced-embezzlement
Here is the District Attorney’s press release on this matter:

Contact: Art Campos                         Public Information Officer                         916 543-8076                         Scott Owens                         Assistant District Attorney                         916 543-8000   OFFICE MANAGER SENTENCED TO ONE YEAR IN COUNTY JAIL FOR EMBEZZLING $47,000 A 24-year-old woman who worked as an office manager for a dentist in Roseville has been sentenced to one year in the Placer County jail for embezzling more than $47,000. Holly Ann Keate of Rocklin was also placed on five years of probation and ordered to pay back $47,431 to the dental office by Placer County Superior Court Judge Colleen Nichols. The sentencing took place on Nov. 12. Keate’s former employer, Dr. Thomas Schlehofer, wrote in a letter to the judge that the defendant deceived people “with her power of authority over patients.” “She has abused her managerial position with malicious neglect of patients, their personal files, their credit cards and their cash,” the dentist wrote. “She preyed on the senior citizens of our community knowing they did not have insurance and would pay cash.” Schlehofer wrote that Keate also caused coworkers to miss out on bonuses while she lied to him about employees’ performances and that the loss of the $47,431 “nearly collapsed the office.” In addition, because of the lost funds, the dental office was unable to send money to sponsored charities such as an orphanage, he wrote. Schlehofer wrote that Keate used the embezzled money to take a vacation and to have laser treatment and elective plastic surgery. According to prosecutor Joseph Hoffmann, Keate embezzled the money from Aug. 25, 2008, until Jan. 22, 2009. Roseville police investigated the case, obtained an arrest warrant and apprehended her on April 18 as she was about to board an airplane at Sacramento International Airport for a vacation in Hawaii. In September, Keate entered a plea of no contest to a charge of grand theft by embezzlement.