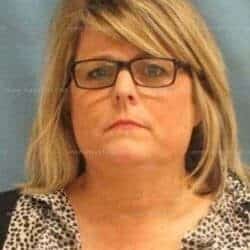 Little Rock, AR – Pulaski County Circuit Judge Barry Sims denied bail Monday to a Bryant woman who was charged with stealing $75,000 from a car dealership after she had already pleaded guilty to stealing $31,000 from a dentist she had worked for.
Kelli Lynn Silor, 49, was arrested in February, four days before she was due to be sentenced by the judge for forgery in the theft of $31,049 from Dr. Richard Lewis of Maumelle between April 25, 2014, and June 9, 2014. She pleaded guilty in December to the Class C felony charge, which carries up to 10 years in prison.
But Little Rock police arrested her Feb. 25 and charged her with theft and forgery counts based on a forensic audit at Parker Cadillac, on North Shackleford Road, that showed $75,265 had been stolen while she was an office manager there, detective Brett Stewart told the judge.
The money came from dealership accounts she controlled, Stewart said.
Some of the money was taken in cash from deposits, and some of it was stolen through forged checks, at least one of which was as large as $9,600, he said.
Silor, in a recorded interview after her arrest, admitted to taking money from the Cadillac dealership, but said she didn’t know how much it was, Stewart testified.
Challenged by defense attorney Rob Berry, Stewart said police had no video of Silor cashing forged checks. The detective also acknowledged that someone else could have accessed the dealership accounts using Silor’s personal identification number.
The money was taken between June 1, 2015, and Jan. 5, he said.
Deputy prosecutor Jill Kamps pointed out that at that same time Silor had been free on bail for the thefts from the dentist’s office, where she had been a receptionist and cashier.
She was arrested in July 2014 by Maumelle police who said she forged and altered checks at the dentist’s office to steal money.
Court records show that in August 2008 in Van Buren County, Silor was convicted of felony theft for stealing $14,776 from Payton Dodge Chrysler Jeep dealership in Clinton by forging checks on the company’s account.
She received a 10-year suspended prison sentence in that case and was ordered to pay restitution at $200 a month.
Two months later she was sentenced to two years in prison in Faulkner County Circuit Court on two counts of defrauding a secured creditor. Details of the case were not immediately available, but court records show she was ordered to pay $50,046 to HomeBank of Arkansas.
She also has convictions for felony hot-check writing from Faulkner County in 2008, Searcy County in 2002 and Van Buren County in 2001 and 2002. She also had seven misdemeanor hot-check convictions between 2000 and 2001 in Greenbrier.
James Silor, her husband of 19 years, testified Monday that the mother of four needed to be released because she has a heart ailment and he is concerned that she’s not receiving her medication while in jail, citing a fainting spell.
He also said he needs her to help manage the household finances, telling the judge that he is struggling to figure out the bills since she’s been jailed. James Silor also testified that he has never seen any excess money in the home.
“If there was money coming in, we sure didn’t see it,” he told the judge.
Sims, saying the evidence indicated a high likelihood of conviction, rejected Kelli Silor’s bail request, meaning she will remain jailed for the foreseeable future.
“She’s admitted to taking over $100,000,” Sims said. “She’s not going anywhere.”