An accused thief who targeted dental offices in Johnson County and elsewhere has been caught by police.

Bruce Byrd appeared in a Johnson County court on Wednesday as he went before a judge to answer to a dozen charges ranging from identity theft to burglary. 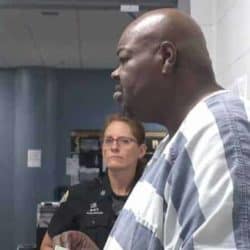 He had been on the radar of investigators for a while, accused of targeting the dental offices of Dr. Frank Wolfson at College and Quivira.

Wolfson told KCTV5 News off camera that no one saw a thing when Byrd allegedly walked right through the door, opened the doctor’s briefcase and wallet and left with his credit cards.

He’s accused of charging thousands of dollars worth of merchandise on the card.

Byrd, who’s charged with the same type of crimes near St. Louis, was a preacher before moving to Kansas City.