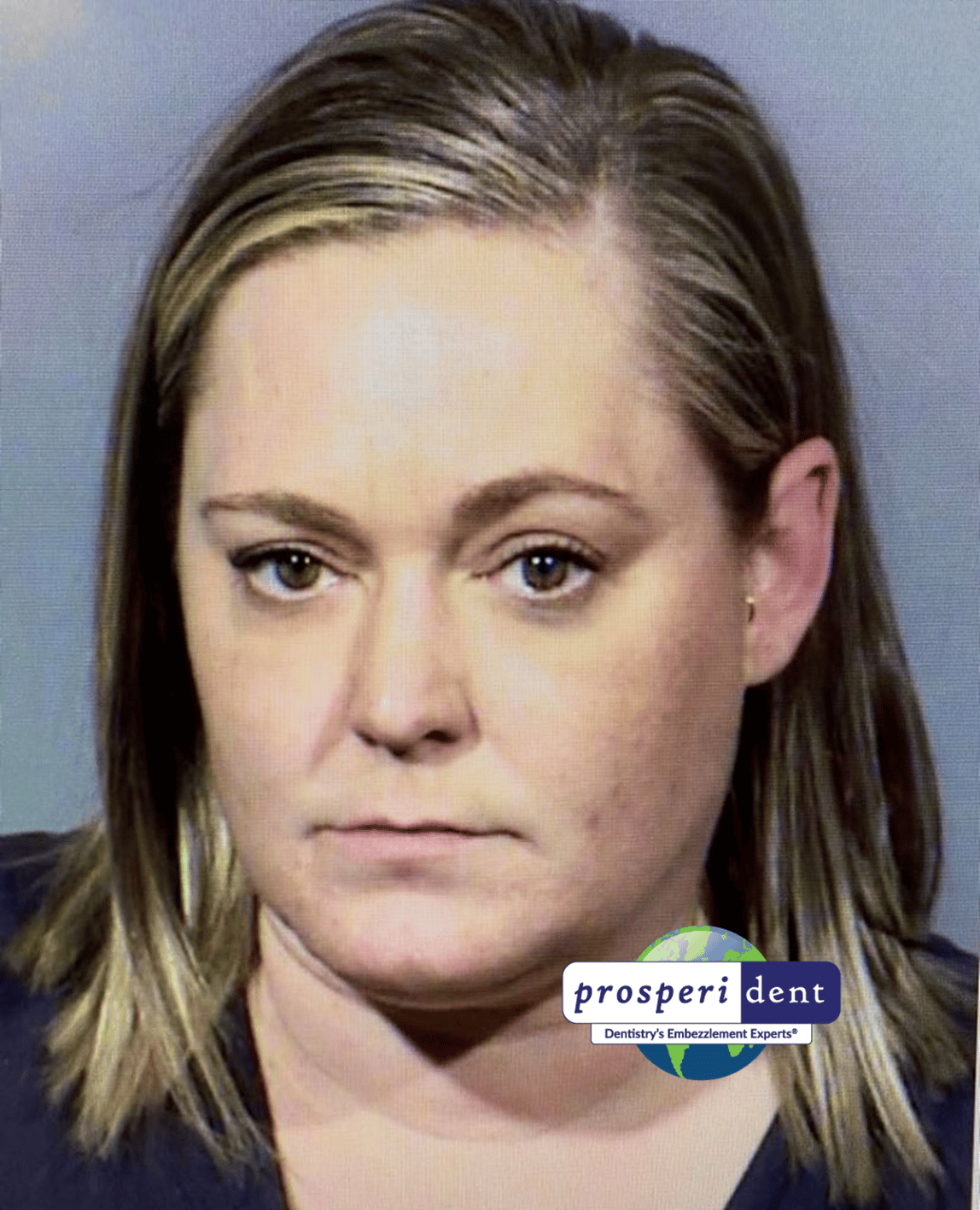 Danielle Powers has pled guilty to two counts of embezzlement and one count of theft. She will serve at least one year in prison and must pay restitution to her victims. Until recently, she was looking for word in dental practices in Nevada. We understand that Ms. Powers might be using the last name “Halverson” when applying for jobs.

When you talk with Prosperident’s Scott Clifford for even a few minutes his ability to out-think embezzlers shines through clearly. As a Supervising Examiner, Scott handles some of Prosperident’s most challenging cases.

One of Scott’s recently completed cases resulted in this woman, Danielle Powers, being arrested for embezzlement. She is charged with four counts of theft over $5,000. Her bail was set at $250,000.

She was recently profiled by a local TV station:

Danielle Powers, 42, is charged with six counts of theft and five counts of embezzlement. In all, she is accused of stealing money while working for three dental practices across the Las Vegas valley.

“It’s so easy to interview someone and then put them in that position of trust,” Staten said.

A video on the dental practice’s Facebook page shared with the I-Team features Powers saying, “Our goal here at Desert Hills Dental is always to make your dentistry affordable.” Another post celebrates Powers’ birthday, calling her “the most fabulous office manager ever.”

“I had too much trust in one person who almost nearly sunk my ship,” Staten said.

Powers is accused of stealing hundreds of thousands of dollars from Desert Hills Dental over a 5-year span, court documents said. Evidence in that criminal case includes surveillance video, which prosecutors said shows Powers coming back to work and taking $7,000 left on her desk.

In April 2021, a dentist at Smile Vegas Dental on Blue Diamond Road near Durango Drive told police Powers had stolen more than $10,000 from his business, police said. The owner and dentist at the practice said he hired Powers in June 2020.

The dentist became suspicious after Powers “was adamant” about not appearing on the practice’s website and about not hiring any more office staff. The dentist hired a private investigator who found Powers was facing charges for embezzling from Desert Hill Dental, police said.

“[The private investigator] found Powers stole cash paid by patients and never recorded the payment to the billing software, leaving patients with balances that they didn’t owe,” police said. “In other instances, Powers attempted to conceal the theft by use of deceptive entries in the software.”

In their report, police reference more surveillance video, which they said showed Powers taking $300 from a patient and hiding “it under a stack of clipboards,” they said.

In November 2020, Powers told the dentist she needed a day off for the reading of her grandmother’s will. In reality, she had a hearing in the Desert Hills Dental embezzlement case, police said.

In November 2021, a third dentist filed a report with police, saying she too was a victim. That dentist hired Powers in September 2021 and said $3,600 was missing.

“Defendant has made a mockery of this court and her release conditions by continuing to engage in the very conduct she is accused of in the instant case,” prosecutors wrote in court documents filed earlier this year, asking a judge to hold her without bail. “She continues to harm business owners in our community by using their business as her personal slush fund.”

Officers arrested Powers outside of her home last week after she skipped court in February.

“Were you surprised when this happened not only a second time but now a third time?” the I-Team’s David Charns asked Staten.

“It’s a hard crime to prosecute,” she said. “It’s very hard to get through the system legally.”

“I made some bad choices to get myself here, I agree to that,” Powers told Villani.

Villani noted Powers’ Tuesday hearing was on a bench warrant for skipping a hearing and told her to file the correct paperwork with the court.

Staten warned all dentists to do their homework because entrusting the person running their business.

“It’s so important to do a background check,” Staten said. “If anybody’s going to be sitting and counting your money or dealing with money in the office there should be a thorough background check done.”

“Have you talked to her since?” Charns asked Staten.

“No. No. I think about it once in a while, but no. I wouldn’t have anything nice to say,” Staten said.

She won a civil case against Powers, where a judge ordered her to pay back the stolen money.

In her two criminal cases, Powers had pleaded not guilty. She has not officially been charged in the third embezzlement case.