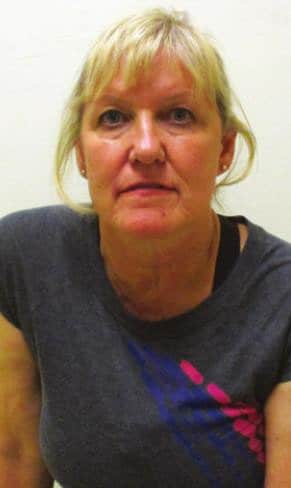 Kristy Staley, from Dillon admitted to stealing money from retired dentist John McCollum while working for him and received a six-year deferred sentence in Fifth Judicial District Court last week.

Kristy Staley, 61, pleaded guilty to felony theft (common scheme embezzlement) in March. She admitted charging multiple fraudulent purchases on McCollum’s business credit card between 2015 and April 2021, for her own use. She was a four-decade employee of McCollum’s and her name was on his business card for office purchases. Additional felony charges of conspiracy: exploitation of an older person, incapacitated person, or person with developmental disabilities (common scheme), and one count of theft (common scheme) were dismissed as part of a plea deal in the case.

Deferred sentences allow defendants to comply with specific conditions over a set time period, and can have their record cleared if they do so.

Before sentencing and in front of a packed courtroom filled with Staley and McCollum relatives, Fifth Judicial District Court Judge Luke Berger recognized the widespread community interest in the case, and wanted to ensure both sides were comfortable with having him pronounce the sentence.

“I cannot tell you the amount of people that have approached me on this. I quit shopping at Safeway, I quit talking to people like over the last couple of months, because everyone has an opinion and everyone wants to talk to me about this,” he said. “For the most part, I do my due diligence with ‘I can’t talk about it,’ but I’ve had people talk to the back of my head as I walk down the street.

“I don’t think it biased me in any way,” Berger continued. “It doesn’t raise an ethical concern to me – I don’t think anyone engaged me inappropriately…but it’s kind of hard to walk away from, like your parents’ friends when they are talking to you. You have this degree of respect where you’re like, ‘I’ve known you for 30 years, but I can’t talk to you about this.’ But at the same time it’s just kind of weird. I just wanted to bring it up and if you’ve got an issue, let me know.”

Assistant Attorney General Thorin Geist and defense attorney David Maldonado assured Berger they were both confident in his ability to avoid ethical conflicts.

“When I first learned of this betrayal by Kristy, I was shocked. I did not believe my employee of 40 years and my friend could do this. Even when they showed me the paperwork of all the charges and the interview with (Dillon Police Chief) Jeremy Alvarez, I could not believe it,” the statement began. “I was recovering from a knee surgery and a horrible infection. I was not only in physical pain but emotional pain from this horrendous betrayal…. Never in my life did I think she would betray me like she did.”

McCollum’s statement noted the almost-like-family ties between his family and Staley’s, adding he entrusted his daughters to them when he and his wife Nancy would go on vacations. He wrote he did not understand why Staley “always told me I was broke,” since the house was paid off, and he and his wife did not buy much, and drove their vehicles for decades until they broke down.

“As I look back, I guess I should have been less trusting, but that goes against my morals that my family instilled upon me. I keep asking why someone of 40 years would take advantage of a man who gave her a job right out of high school,” the statement added. “It breaks my heart about this betrayal. I’m not a fool – I’m just a man who trusts people.”

The statement also questioned why Kristy’s son, Kevin, pushed so hard to have him sell a piece of property that he felt was worth more than was being offered. Kevin Staley was charged with felony conspiracy: exploitation of an older person, incapacitated person, or person with developmental disabilities (common scheme), and was accused of defrauding McCollum by lowballing an offer to purchase McCollum’s property, twice. At the time, McCollum was recovering from a medical procedure and under heavy painkillers, according to charging documents. That case was dismissed as part of Kristy Staley’s plea agreement.

The charges in both Staley cases stemmed from a Department of Health and Human Services investigation started by McCollum’s family members. The family reported fraudulent purchases on McCollum’s business card for vehicle parts that did not match his cars, and for meals and purchases in Utah when McCollum was in Idaho.

Kristy Staley elected to not make a statement; her attorney noted she was not comfortable speaking in public and was nervous. Berger told her that defendants have that right, and would not hold it against her when considering a sentence.

Geist said the plea agreement was reached with multiple discussions between both sides and their families, and was contingent on Staley paying $30,000 in restitution. A check for that amount from Mr. and Mrs. Staley was provided to the court in March when Staley pleaded guilty to the charge. It also called for Staley to tell her current and future employers of the conviction (a standard condition for this type of offense), and prohibit her from working in a place where she is responsible for money for the entire six-year deferred period.

Geist expressed concerns about some comments Staley made in the PSI.

“I’m a little troubled by her comments on page 6, though, where she appears to backtrack – these are my words – she seems to be blaming the victim’s daughters a little bit for everything, and by all appearances, making it sound like she had a right to take from her employer,” he said, though acknowledged she did plead guilty to the thefts.

Geist highlighted statements John McCollum said during interviews with the two attorneys while they were negotiating the plea agreement.

“What I can tell you from that meeting, the part that struck me the most was his comment at the end, where he almost wanted to take responsibility for what happened. I’m paraphrasing: He started to say that this was his fault because he should have paid her more,” Geist said. “This particular defendant has no criminal record. She’s essentially led a law-abiding life. This conviction is almost certainly going to keep her from working at the bank she’s working at – she’s a notary. This would be a type of fraud conviction, so she’s probably going to lose that as well. There will be some pretty serious ramifications on this one as well.”

Maldonado also pointed to Staley’s lack of a criminal record and how rare that is for the court to see, her strong family support group, and her willingness to plead guilty. He also explained Staley could withdraw her plea if the court elected to sentence differently from the agreed terms.

“I’m forced today to kind of walk a fine line between trying to give the court the most insight, while at the same time not either blaming or minimizing,” he said, adding the goal was to accomplish justice in the case.

“One of the things that came to light during that interview, is what was the scope – what was Ms. Staley truly authorized to purchase? On the one hand, there can be no doubt some of these items would have been outside what a person could receive in the ordinary course of business. On the other hand, the way some of the purchases were made, and after four decades of working with someone, it also became unequivocally clear that the line between business and family was so blurred, and they had worked together so long, that some things could have easily been authorized but not necessarily to the extent that Ms. Staley utilized them.”

Maldonado explained some credit cards have reward points that could have been used for personal items, and noted how Staley “handled almost every aspect of this business, from supplies, to decor, to bookkeeping.”

“During the course of this case, one thing that stood out was there was a professional accounting firm involved the entire time, and there was never a red flag,” he added.

Maldonado aired the property sale situation and the accusations Staley represented McCollum’s wife to obtain life insurance benefits were dis puted. He suggested McCollum authorized Staley to get the benefits to buy the water rights to the property in question.

“In other words, while Kristy did call and represent to be Mr. McCollum’s wife for the insurance proceeds, we believe the proceeds all went to Mr. McCollum in turn for that purchase, so she gained nothing financially from it.”

‘You can be a good person and do stupid things’

Prior to sentencing, Berger told the courtroom of more than 30 letters he and both counsels received regarding Staley, and how a number of them indicated how unlikely Staley could have committed the crime.

“They all say you’re a good person, they all talk about your family, and I don’t doubt any of that. If I would have gotten letters that said the opposite, that would have shocked me, quite frankly,” he began, addressing Staley. “Nowhere in the code does it require someone to be a bad person. You can be a good person and do stupid things.

Berger explained he intended to follow the plea agreement since all the parties agreed to the terms and – between the financial penalty and the future impact to Staley’s employment prospects – he felt the outcome provided the right balance between punishment and remediation.

“I want to make this statement about the justice system. I read these letters and I’ve had people say things to me – I’m not quoting verbatim – but in the letters they say they don’t understand why you took the plea. They just can’t wait until I hear your version of events. They know you didn’t do what you were accused of,” he said. “I get that these people that almost make it seem like this is on me – Judge Berger, she didn’t do this, and if you sentence her it’s a travesty of justice.

“At the end of the day here, the recommendation from the parties does what it’s supposed to – it brings finality to the case. I think it’s appropriate. I think the ramifications from it, you’re going to have to deal with them,” he added. “I’m sentencing you, but it’s nothing I’ve done. You’ve done this to yourself.”