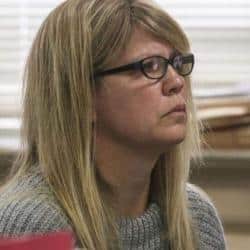 Randolph woman gets probation for stealing $75K from employer

A married mother of three was sentenced Friday to five years’ probation and ordered to undergo a mental health evaluation on her guilty plea to stealing $75,000 over a three-year period from her former employer, a dentist in Randolph.

Defendant Sabra Aschenbrenner, 46, repaid her victim, Dr. Sharon Brackelmanns, the full $75,000 on Friday but offered no explanation why she systematically stole between February 2010 and January 2013, mostly by using credit cards in the name of the victim.”I’ve learned a lot about myself,” Aschenbrenner told Judge Stephen Taylor in Morristown. “Hopefully this restitution will bring some peace to the victim.

“Defense lawyer Christopher Porreca said his client, who is involved in ongoing counseling, has taken full responsibility and is sorry for her actions as an office manager/bookkeeper for the dentist.”This matter has taken a serious emotional toll on my client,” Porreca said but noted that Aschenbrenner’s thefts have scarred the victim also.Aschenbrenner pleaded guilty on Dec. 1 to theft by unlawful taking and the plea agreement negotiated between Porreca and Morris County Assistant Prosecutor Michael Rappa recommended a lengthy term of probation and no time behind bars. Rappa said a long probation term was warranted because of the “cool and calculated” way the stealing occurred, with Aschenbrenner facing and interacting with her employer on a regular basis.

The judge wanted to know what the money was used for, saying that in his sentencing analysis he wanted to examine whether hardship was present and whether Aschenbrenner appeared likely to re-offend. While Aschenbrenner remained silent, Porreca and Rappa said they could not specifically say where the money went but Porreca said the money was spent on “personal items, nothing extravagant” and Rappa said financial necessity was not the reason.

“Did she want to drive a Mercedes Benz she couldn’t otherwise afford?” Taylor queried.”This is a significant embezzlement of funds,” the judge said. “Instead of robbing a bank she embezzles funds from her employer.” Taylor highlighted portions of the victim-impact statement the dentist provided the court and noted how she had trusted Aschenbrenner.

“She was severely disabled financially as well as emotionally by this defendant,” Taylor said of the victim. The judge warned Aschenbrenner that she can be spent to prison for up to five years if she violates probation.  Rappa said the victim has the ability to file a lawsuit against Aschenbrenner if she believes further restitution is warranted.

Eight months ago, Aschenbrenner and her family were the recipients of $22,403 raised through a GoFundMe site established by a concerned resident of Randolph after the Aschenbrenner family’s home on South Road burned down on May 24 while the family was away for the Memorial Day holiday.

A fire official previously said the blaze was not criminal in nature and appeared to have originated in the garage. The family dog, Bogey, perished in the fire.