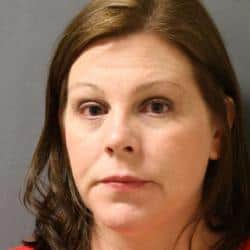 An employee at a dentist’s office in Bellaire is accused of stealing the identities of more than a dozen patients, and police say she wanted only one thing.At Dr. Karisha Madden’s dental office, police say a new receptionist was up to no good. They say Angela Lee Collum, 40, was allegedly stealing patients’ identification to get illegal prescription painkillers.

“This employee had been an employee for approximately 90 days, the past three months,” said Boyd Shepherd, attorney for Dr. Madden.

Shepherd says a local pharmacist alerted Dr. Madden to the problem after noticing an unusually high amount of Vicodin and hydrocodone prescriptions were being filled.

“Dr. Madden, of course, is busy every day working with patients in the operatory. She puts a lot of trust in her office staff to manage patients.”

But that trust was violated. Police say Collum illegally used the identity of 19 people in order to get pills for herself and her family between August 27 and September 10 of this year. The doctor says 14 of those victims are patients there.

Investigators say Collum illegally used their name and date of birth, along with her employers DEA number to call in prescriptions. They say she would transfer the order after hours to a pharmacy near her own home in Pasadena where Collum was allegedly caught on camera picking up the pills.

“Each one of those patients has been contacted by mail in accordance with the legal requirements for notifying them regarding a breach of their protected information,” Shepherd said.

Now the dentist is contacting her patients and reporting the identity theft to state and federal agencies.

Collum is charged with fraudulent use of identifying information.