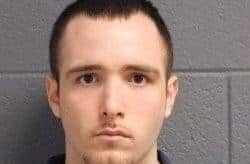 PAW PAW, Mich (February 14, 2014) – A reported break-in at a dental office in Antwerp Township has led to an investigation involving drug fraud and stolen medication. The investigation started on Tuesday, after deputies were alerted to a reported break-in at a dental office in Paw Paw.  Detectives discovered an employee at the office had stayed after work and had invited friends into the office.  While the group was there, several items were stolen including credit cards, blank checks, shoes, a prescription pad and a doctor’s signature stamp. Deputies believe the suspects involved may have called in prescriptions to several Kalamazoo area pharmacies using the doctor’s identification numbers for the prescriptions.  After they were called in, deputies say it appears friends went to the pharmacies to get those prescriptions filled. On Thursday, two suspects were charged in connection to the investigation. Kyle Hughes, 23, from Galesburg is lodged in the Van Buren County Jail on charges of Larceny in a Building.Emily Griffin, 24, also from Galesburg, is facing possession of methamphetamine charges in connection to this investigation. Deputies say the investigation into the prescription drug fraud continues, and more charges may be possible. Have questions or concerns? Call us toll-free at 888-398-2327 or choose “Contact Us” from our menu Content retrieved from http://fox17online.com/2014/02/14/theft-at-dental-office-leads-to-drug-fraud-investigation-larceny-charge/