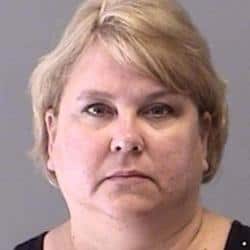 A 48-year-old Willis woman was told she would have to serve 10 years in prison for stealing tens of thousands of dollars from her employer unless a judge decides six months from now that she can go on probation.

Brenda Lois Hobson pleaded guilty in October to theft of property between $20,000 and $100,000. District Judge Travis Bryan III decided her punishment Thursday, which included a $10,000 fine.

She has two weeks until she must report to Brazos County Detention Center.

After six months, she’ll go before the judge and he will decide whether she should be put on probation.

Hobson admitted to manipulating financial records over the course of several years at Brazos Valley Periodontics Center where she worked as a receptionist and office manager.

Sam Seale, the owner of the clinic who was called to testify against Hobson, complimented the efforts of Assistant District Attorneys Kevin Capps and John Brick, who prosecuted the case.

He said he was pleased Hobson will have to spend some time in prison, but was disappointed she could be put on probation after six months.

“I feel like the severity of her crimes, of her theft and fraudulent activities, warranted more than that,” Seale said.

Seale also thanked his patients who stayed with his practice during the investigation of Hobson’s actions.

Prosecutors said Hobson would pocket cash and tell patients to sign blank checks that were later deposited in her bank account. She would then change financial records to cover her tracks.

Hobson said she would use the money to buy purses, shoes and to get her nails done.

Hobson, who testified in her own defense, admitted her wrongdoing and apologized to Seale and his family.

“I am very sorry for everything I did, for what it’s caused for you and your family, for your employees and the business,” she said to Seale. “I know you said earlier that you’re not able to forgive, and I completely understand that. I can’t imagine what you and your family have gone through.”

Hobson was fired from the job she held before the dental clinic after an investigation showed she forged a signature to divert $5,400 to her own bank account.

Since the signature she forged was her mother-in-law’s — who didn’t wish to press charges — the incident never made it to criminal court.

Hobson’s defense attorney, Craig Greaves, argued that because she didn’t have a criminal record and that she was receiving counseling, she should be given probation instead of jail time.

“There’s a lot of things you can do here,” he said to the judge. “But sending her to the pen is not going to rehabilitate anybody, it’s not going to deter anybody.”