Prosperident had a visitor on the weekend — Hurricane Arthur traveled up the East Coast and walloped us on Saturday.  Fortunately, our extensive computer infrastructure didn’t miss a beat and remained in full operation throughout the storm.  Others weren’t so lucky.  At the peak, 140,000 Nova Scotia households were without electricity, and as I write this (two beautiful sunny days after Arthur hit) there are still about 30,000 households more-or-less patiently waiting for power. 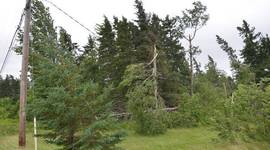 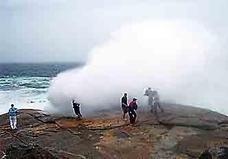 Interesting, but what does this have to do with embezzlement, you might ask?  The sheer power of nature is, at different times, wondrous and frightening.  While the determination and ingenuity of a motivated embezzler will not knock down trees or cause boats to sink, measured against the scale of human emotions it ranks somewhere between a tropical storm and a hurricane.
And kind of like the people in the picture by the rocks at Peggy’s Cove who have placed themselves in (possibly mortal) danger by underestimating nature’s power, underestimating embezzlers is also perilous.
I encourage you to take advantage of the summer months to give careful thought to whether anyone in your office is demonstrating embezzlement-like behavior.  The Association of Certified Fraud Examiners recently released its 2014 Report to the Nations, which gave some very interesting statistics — over 90% of embezzlers displayed at least one such behavior, and over 60% presented two or more behaviors consistent with embezzlement.
Have questions?  Click HERE.