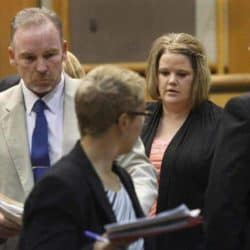 A woman who managed the books for a Richland doctor’s office is accused of stealing $745,000 from her employer over at least four years.

Jennifer L. Morris, 42, is believed to have bought jewelry and purses, taken numerous trips and paid for dog boarding and cellphone services with the money, according to court documents.

The alleged embezzlement was discovered after an internal investigation by Dr. Robert L. Whitson.

Morris was an hourly employee for the family practice at 846 Stevens Drive, working an estimated four to eight hours a month.

She removed financial documents from the office and took them to her home, possibly to cover the theft, documents said.

Whitson said Morris worked for him for 12 years.

“She had my faith completely; 100 percent trust,” Whitson said Tuesday. “I was enormously disappointed.”

He told the Herald that it’s like a marriage — the divorce rate may be 50 percent, but people still go into the union expecting more.

“It was preposterous,” Whitson said of Morris’ alleged actions. “And it’s almost no way there could be any kind of defense mounted, there were so many legal oversights and omissions.”

Morris has been charged in Benton County Superior Court with first-degree theft. The charge includes the aggravating circumstance of being a major economic offense.

Deputy Prosecutor Terry Bloor alleges Morris used her position of trust and a high degree of sophistication or planning to commit multiple incidents over a long period of time.

Morris was sent a summons to appear in court Sept. 15.

She has hired Kennewick lawyer John Jensen, who declined to comment Tuesday because he has not yet received any investigative reports.

However, when Pasco police Officer Eric Fox was called to her home on an unrelated matter, she told him “that she had done something really stupid and was going to prison for five to 10 years,” documents said.

The investigation revealed that $744,496 was taken from Whitson’s business account between January 2012 and February 2016.

Morris was due $6.70 per pay period because of her limited hours. Yet, she wrote herself payroll checks as if she was working full time, usually repeating the same amount twice a month, starting at $1,100 in 2012 and increasing to $1,600 by 2016, court documents show.

Her son was not an employee of Whitson’s practice, but did some janitorial work in the office. While there are checks written to him that are supported by legitimate time cards, there are other checks in small amounts like $28 and $206, according to the documents.

Morris allegedly used the doctor’s account to make frequent electronic fund transfers to cover payments on her mother’s Chase credit card. Though the individual transfers ranged from $1,000 to $10,425, documents show there were some months she would make up to seven payments within a few weeks.

Her mother, Bonnie Morris, reportedly told investigators that she let her daughter use her credit card, though she did not know the extent to which she was using it.

She claimed that Jennifer Morris was buying purses with the card to resell them, but also knew she had been spending large amounts of money and suddenly had “bunches” of jewelry and taken different trips, court documents said. Bonnie Morris said she thought her daughter had stolen about $300,000.

A search of Jennifer Morris’ home allegedly turned up several bookshelves filled with purses still in their packages, and multiple bags of jewelry.

Whitson told the police that he bought all the office supplies, so he didn’t know why there would be multiple Costco charges on his account. Detectives reportedly recovered lists of some purchases and noted that it is clear the expenses, for hundreds of dollars each time, were for personal items.

Whitson and another employee had cellphones that were paid for by the business. He did not authorize Morris to buy four tablets and pay for her personal cellphone accounts that were in his name, court documents said.

On Tuesday, Bloor said that no charges have been filed against Morris’ son or mother.