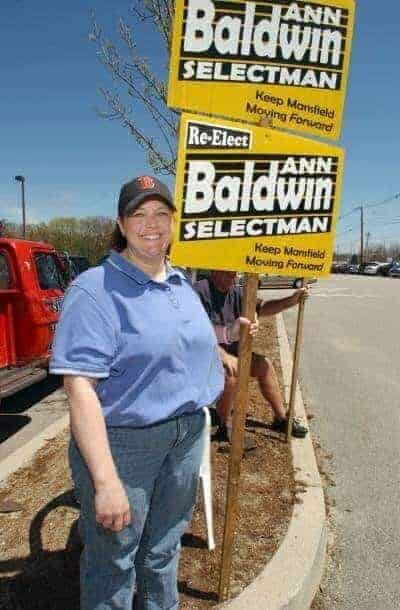 Ann Baldwin has plead guilty to embezzling from a Norton dental practice.  She was placed on probation for five years and must pay the restitution to Norton Dental Associates, 190 East Main St., in monthly installments of $300.

ATTLEBORO – A former Mansfield selectwoman charged six years ago with stealing while employed at a Mansfield dental office, faces new allegations she stole an estimated $100,000 from a Norton dental office.
Ann M. Baldwin, 43, of 56 Benefit St. in Mansfield, pleaded innocent Friday in Attleboro District Court to felony charges of larceny and improper use of a credit card.
The charges are related to alleged thefts from Norton Dental Associates at 190 East Main St., in Norton, where Baldwin worked part-time from 2013 until July 2015, when she was fired, according to court records.
Assistant District Attorney Melissa Tafe said Baldwin is accused of using a portion of the stolen funds to pay for a vacation to Myrtle Beach, S.C., in July 2014.
Baldwin and four other guests stayed at the Compass Cove Oceanfront Resort for a week, according to court records.
The resort boasts of being one of the largest Myrtle Beach hotels, with various amenities, including six indoor and outdoor pools, three indoor and outdoor lazy rivers, Jacuzzi hot tubs and kiddie pools, according to its website.
Myrtle Beach is a major golf, spring break, and vacation destination.
The estimated loss from the alleged thefts was provided to police by Dr. Stanley McMorrow, but the exact amount has not yet been determined, according to court records.
Baldwin was a Mansfield selectwoman in January 2010 when she was charged with stealing more than $47,000 from Pediatric Dental Care in Mansfield and improperly receiving unemployment payments.
She later admitted police had sufficient facts to find her guilty of the larceny charge. Charges related to the unemployment payments were dismissed.
Baldwin was ordered to pay $15,000 in restitution, and the case was later dismissed.
Her lawyer, at the time, called the charges politically motivated. Baldwin served as a selectwoman from 2006 to May 2010.

ATTLEBORO – A former Mansfield selectwoman will not do any jail time in the embezzlement case in which she was accused of stealing more than $47,000 from the dental practice where she worked.

Ann Baldwin admitted sufficient facts for a finding of guilty Friday in Attleboro District Court to a charge of larceny over $250 in the alleged theft from Pediatric Dental Care of Mansfield.
The charge was continued without a finding for three years, and Baldwin was ordered to pay $15,000 in restitution.
Two other charges involving the improper receipt of unemployment payments were dismissed, Baldwin’s lawyer Glen Hannigan said.
Hannigan said he believes the charges filed against his client were “politically motivated.” He said that the case should have been tried in a civil rather than a criminal court.
The Boston lawyer said his client feels “vindicated” by the judge’s decision to dismiss the two other charges.
Baldwin will remain on administrative probation until 2013.
Content retrieved from http://www.thesunchronicle.com/news/no-jail-time-for-baldwin/article_4d4767f9-f36b-5796-8781-519046153220.html

Selectmen Chairwoman Ann Baldwin is facing allegations she embezzled more than $47,500 from a former employer and submitted false claims to the state unemployment office.

Baldwin, 37, is accused of embezzling an estimated $47,576 from Pediatric Dental Center of Mansfield over four years, beginning in December 2005 when she was hired as the business’s part-time office manager, according to a state police report by Trooper Chad W. Laliberte.

The report, dated Jan. 7, alleges Baldwin was able to embezzle the large sum of money from the South Main Street business by overstating her hours on various dates between 2005 and 2009.

Baldwin has countered the embezzlement accusations, claiming she could not have inflated her hours because she was a salaried employee according to the report.

Authorities have also accused Baldwin of fraudulently receiving close to $2,700 in unemployment checks, claiming she underreported the number of hours she worked as a part-time employee to the state unemployment office between 2005 and 2006.

According to the police report, the dental practice’s owner, Robert Moreau, and his wife, Susan, contacted Mansfield police in May 2009 to report Baldwin’s alleged crime. The case was referred to the state Attorney General’s Office, who then referred it to the Bristol County District Attorney’s Office.

Moreau was formally interviewed by investigators back in September 2009.

According to the report, in the interview with investigators, Moreau said he terminated Baldwin from her position as team manager in April 2009 after discovering financial improprieties in his dental practice’s financial records.

Moreau told investigators he had hired Baldwin in December 2005 as a two-day-a-week hourly employee who worked 8 a.m. to 5 p.m. Mondays and Thursdays. Additionally, Moreau said he authorized Baldwin to come in on the days the office was closed to return patient calls and do other tasks, but for no more than two to three hours per day, the report stated.

By 2007, Moreau said Baldwin was still a part-time employee. However, Moreau’s business’s clientele had expanded, so Baldwin’s hours were increased so that she worked Monday through Thursday from 8.a.m. to 5 p.m.

In November 2007, Baldwin asked to begin leaving work at 4 p.m. on workdays instead of at 5 p.m., making her pay for only seven hours, rather than eight, according to police reports.

The dental practice’s payroll processing company, HR Knowledge, initially tipped off Moreau about the business’s accounts being askew, according to the police report.

His curiosity further irked by the fact that his business’s profit margin was quite low despite his expanded client base, Moreau began to examine his business’s financial records in April 2009, the police report stated.

According to Moreau, Baldwin allegedly used the company’s credit card to pay the practice’s bills instead of paying bills by check from the business operations account.

Moreau’s practice allegedly accumulated thousands of dollars in late fees due to Baldwin paying bills late or not at all.

After doing further research with his wife, Moreau compared the money Baldwin had been paid over her years of employment with the total hours she worked per pay period and the actual days the office was open, and soon determined Baldwin had been inflating her hours, either by working more than she was authorized or more than she could have possibly worked during a specific pay period, the report stated.

According to the police report, the Moreaus stated they believed Baldwin failed to pay bills out of fear her inflated payroll was not leaving sufficient balances in the business’s operations account each month to cover the dental practice’s bills and business expenses, and that her “scheme” would be discovered.

In the report, Moreau also stated the business’s petty cash box was depleted and replenished “quite often” with no receipts of explanations as to where the money was spent.

Moreau also stated he gave Baldwin a signature stamp for company checks, allowing her to make checks payable to anyone, including herself, without Moreau’s knowledge.

Baldwin was interviewed by State Troopers Eric Benson and Laliberte on Dec. 1, 2009.

In the audio-recorded interview, Baldwin allegedly admitted to stealing an estimated $5,300 by making out checks to herself on several occasions, but said she had attempted to pay back the sum by sending a series of checks, totaling $4,700, to the dental practice after her termination, the police report stated. She said she had paid back only $4,700 because she had filled out a check for an estimated $600 but had never deposited the check, which she revealed was still in her vehicle.

Authorities later obtained this check, in the amount of $853, on Jan. 7 when a search warrant was executed at her Union Street home.

Baldwin allegedly told investigators she stole the money because she was behind on her mortgage payments and had attempted to apply for a mortgage consolidation loan in November 2008 using an Internet loan company, but was unsuccessful in obtaining the loan, the report stated.

Two unexplained charges on the dental practice’s corporate credit card to PersonalCreditServices.com in November 2008 support this claim, according to the police report.

During her December 2009 interview with police, Baldwin told authorities she had documents on her home computer supporting her claim she was a salaried employee, but said her computer’s hard drive had crashed.

She was able to recover one e-mail from her computer, which she forwarded to investigators.

In the Aug. 11, 2005 e-mail correspondence, Moreau stated Baldwin’s position could become salaried “as the time passes and the money flows,” but does not concretely confirm Baldwin’s contention that she was ever formally made a salaried employee.

Moreau has denied telling Baldwin she was on a salary at any time.

Baldwin’s computer was seized by police investigators Jan. 6 so it could be analyzed for evidence.

If convicted, Baldwin faces up to five years in prison for each count and fines of up to $25,000.

Baldwin was elected to the board of selectmen in September 2006. She was named the chairman of the board in January 2009. Her term expires this spring.

Baldwin’s attorney, Glen Hannington of Boston, said his client has not said she would resign from her position on the board of selectmen.

“She has no intentions of stepping down at this time,” Hannington said Wednesday.

In addition, Hannington said Baldwin will enter a not guilty plea at her arraignment next Friday.

She will be arraigned Jan. 22 in Attleboro District Court.