MIDLAND, MI — Stephanie Cieslinski of Midland apologized Thursday, Oct. 18, for her involvement in an embezzlement scheme that stole nearly $1 million from the Midland dentist office where she worked.

“What I did is inexcusable,” said Stephanie Cieslinski, moments before a judge ordered her to serve at least three years in prison for the crime.
Cieslinski pleaded guilty to a charge of embezzlement of more than $100,000, although prosecutors allege the actual amount stolen from Midland Dentist Dr. Michael T. Smith over a period of years was close to $1 million.

“Instead of going to dental school and taking all the risks a business owner takes to provide a livelihood, you hit fast forward and went to the profit to put money in your pocket,” Lauderbach said. “There is no way to justify it.”

Cieslinski is to pay $750,000 in restitution and has already paid close to $35,000, said Bay City attorney Robert J. Dunn, who represented Cieslinski.
Dunn said a condition of her plea was that her minimum sentence not exceed 36 months.

Lauderbach said that he would have had “no problem going higher than the 36 month cap.” He said that the court’s objective of getting a defendant out of jail and back to work to repay the victim does not work in this case due to the magnitude of her crime.

“You’re 53 years old, you’re a convicted felon and you are a thief,” Lauderbach told Cieslinski. “You will never repay this, and I will be shocked if Dr. Smith sees a tenth of what he is owed.”

Lauderbach said that when defendants have a reason for theft, such as a drug addiction or a gambling problem, the crime is understandable, although not excusable.

“You just wanted nicer stuff, so you stole money to get it,” Lauderbach said. “I can’t make any sense of that.”

Dressed in an orange jumpsuit, Cieslinski cried when she spoke prior to her sentencing.

“Dr. Smith and his family are good people, and I stole from him,” she said.

“I truly truly am sorry for all the pain I have caused, and after today I hope he can move forward and put this behind him.”

Stephanie Cieslinski’s husband, Kenneth W. Cieslinski, faces two counts of embezzlement by an agent or trust between $1,000 and $20,000, a five-year felony.

Kenneth Cieslinski worked as a corrections officer at the Bay County Jail since January 1986 and was a month away from retiring when his boss, Sheriff John E. Miller, arrested him July 2. 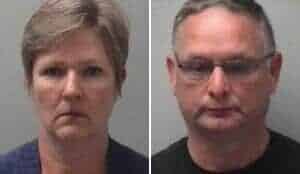 MIDLAND (WWJ/AP) – A Midland man who authorities say helped his wife embezzle from her dentist employer her has been sentenced to pay nearly $1 million in restitution.

Kenneth Cieslinski, 55, appeared recently before a Midland County Circuit Court judge, where he was ordered to repay $998,000 and be on probation for five years.

Cieslinski declined to speak during the hearing. Defense lawyer Eric E. Proschek said the situation has been “hard for everybody.”

Last year, Cieslinski’s 55-year-old wife Stephanie was ordered to serve at least three years in prison for stealing from the Midland dentist’s office of Dr. Michael Smith, where she was employed for 10 years as an office manager.

Over the course of her employment, prosecutors say Stephanie Cieslinski collected checks written to Smith, used his signature stamp to endorse them and followed by endorsing the checks with her own name. She would then deposit the checks into her husband’s credit union account.

The money, which amounted to nearly $1 million over a decade, was spent on vacations, college tuition, new cars, a Harley-Davidson, a $35,000 wedding, jewelry and more, The Midland Daily News reported.Detectives were investigating the couple for over a year and a half before charges were sought.

Stephanie Cieslinski, who was also ordered to pay $715,000 in restitution, is currently appealing her case, according to court records.

In January, a judge ordered Kenneth Cieslinski to turn over his wife’s property to Smith, including a laptop computer, jewelry and a 2006 Jeep Compass.

Smith has also filed a civil suit against the couple. A hearing is set in that case in August.

Did you know that Prosperident is the only investigation firm that is endorsed by the Michigan Dental Association?  Click HERE to learn More.